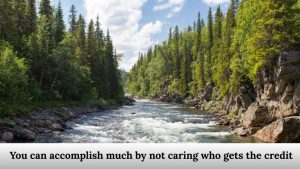 My sister was greatly praised and recognized for her accomplishments earlier today. She had completed nearly two decades of service in the service of the US government across many nations of the world as that was the nature of her job. Of all the praise and anecdotes, one that shone brightest was the US President’s quote, which was used to describe one of the secrets to her success. And the beautiful thing is, it was cited twice by two different people. The various speeches and testimonials from friends, colleagues, and relatives stood out as a beautiful testimony of her goodness.

President Truman’s quote goes like this: “It is amazing what you can accomplish if you do not care who gets the credit.”

Often, acts of kindness, goodness, and love are captured in photographs, videos, and shared in media publications and social media to leverage the best possible mileage by corporates, organisations, and even individuals. What a great nobility in not being concerned about lime light or praise or any recognition. Many of us also fall into the trap of this in one measure or another. This was an eye opener for me, wanting to dig deeper and know more about the possibilities behind this beautiful virtue. In the world, such instances are few.

When we were having dinner, the discussion again went to the meeting, as well as this quote. My son was sharing that the quote had roots in a few biblical verses.

Mathew 6:3 states this. But when you give to the poor and do acts of kindness, do not let your left hand know what your right hand is doing [give in complete secrecy] ( Bible version AMPC)

How beautifully well the verse speaks – forget another person knowing, but we are asked to maintain this in secrecy even between our nearest and dearest one surrounding us.

Let us look at the context of the verse – a few verses above and after it as well. 1 Take care not to do your good deeds publicly or before men, in order to be seen by them; otherwise you will have no reward [[a]reserved for and awaiting you] with and from your Father Who is in heaven. 2 Thus, whenever you give to the poor, do not blow a trumpet before you, as the hypocrites in the synagogues and in the streets like to do, that they may be [b]recognized and honored and praised by men. Truly I tell you, they have their reward [c]in full already. 3 But when you give to charity, do not let your left hand know what your right hand is doing, 4 So that your deeds of charity may be in secret; and your Father Who sees in secret will reward you openly.( Bible version AMPC)

See how beautifully similar the very first verse from Gospel of Mathew, chapter 6 with the quote from President Trueman.

In a different context but in a similar tone, the same chapter speaks about prayer. Pray in privacy, not to be seen.

5 Also when you pray, you must not be like the hypocrites, for they love to pray standing in the synagogues and on the corners of the streets, that they may be seen by people. Truly I tell you, they have their reward [d]in full already. 6 But when you pray, go into your [most] private room, and, closing the door, pray to your Father, Who is in secret; and your Father, Who sees in secret, will reward you in the open. 7 And when you pray, do not heap up phrases (multiply words, repeating the same ones over and over) as the Gentiles do, for they think they will be heard for their much speaking. 8 Do not be like them, for your Father knows what you need before you ask Him. ( Bible version AMPC)

From the above, we see that we should not be using vain and repetitive words.

Often, every bit of progress achieved has multiple stages of work which finally results in accomplishments which are tangible and recognisable. To reach that point, the efforts of many are required in stages which are not noticed, not tangible, yet all these stages are significant in making these achievements possible.

A few specific verses from 1 Corinthians 3 point to this specific matter. 6 I planted, Apollos watered, but God [all the while] was making it grow and [He] gave the increase. 7 So neither he who plants is anything nor he who waters, but [only] God Who makes it grow and become greater. 8 He who plants and he who waters are equal (one in aim, of the same importance and esteem), yet each shall receive his own reward (wages), according to his own labor. 9 For we are fellow workmen (joint promoters, laborers together) with and for God; you are God’s [b]garden and vineyard and field under cultivation, [you are] God’s building.( Bible version AMPC)

Yes, irrespective of the role we have remembering and being confident that the role is significant we carry on doing it with greatest sincerity. As we started in the beginning of this article, we do not aim at praise or recognition. The following verse is a beautiful concussion to the above thoughts.

Proverbs 11:25 The generous soul will be made rich, And he who waters will also be watered himself.( Bible version NKJV)