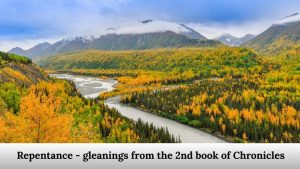 I have many shortcomings. I have sinned as an individual. I have sinned corporately, as a family, as a church, as a company, as a city, as a nation, as mankind. In spite of this sinful nature and multitude of sins, it’s not easy to be weighed down due to sin because of the blindness of my soul. I wonder why I do not find it easy to repent, although I want to.

Godly repentance is precious; it does not condemn. It draws us closer to God. Having our redeemer, Christ Jesus, as our saviour, whose work on the cross is a finished work, gives us access to meaningful and purposeful repentance.
Certain specific songs and some specific readings have us repent from the heart. Our eyes tear up. Not that tearing is important. But the attitude and condition of our souls become right for the seed of repentance to be formed. The seed will eventually bring forth the fruit of repentance as we persevere in it.

Recently, I revisited 2nd Chronicles and found that it contains several portions that quicken the repentance process. I am sharing this so that you can also be blessed in experiencing the sincere heart of repentance, an intimate process between you and the Lord.

Why repentance?
If my people, which are called by my name, shall humble themselves, and pray, and seek my face, and turn from their wicked ways; then will I hear from heaven, and will forgive their sin, and will heal their land. (2 Chronicles 7:14, version KJV) The Lord appeared to Solomon and spoke these words when he had finished building the Lord’s house. Thus, the fruits of repentance include hearing from heaven, forgiveness of sins, and healing of the land. Hearing from heaven implies proximity to the throne room of God. When this proximity is restored, it feels so comforting and soothing.

The Lord also said that if Solomon walked before God in the way of his father, King David, walked, obeying all commands and observing the statutes and ordinances, the Lord would establish Solomon’s throne and kingdom.

On the contrary, if King Solomon and his people turn away from God’s commandments and statues and serve other gods, the Lord will pluck the kingdom from the land and the temple will go into ruin. And people would say that because Israel forsook the God who had brought them out of the land of Egypt and started worshipping other gods and serving other gods. All this caused evil to come upon them and their work.

After Solomon had prayed in the new temple, the fire came down from heaven and consumed the burnt offering and sacrifices. The glory of the Lord filled the house. The priests could not enter the house of the Lord because glory filled the Lord’s house. The presence and power manifested by the glory and presence of God are so very tangible.

And the priests could not enter the house of the LORD, because the glory of the LORD had filled the LORD’s house. (2 Chronicles 7:2 NKJV)

King Solomon organised all matters of the temple, including roles for the priests and Levites to praise and serve the priests. The kingdom prospered. Silver in Jerusalem was as common as stones. Cedar wood was as plentiful as sycamore trees in the low lands. Queen Sheba said that the greatness and wisdom of King Solomon were far beyond what she had heard of.

But matters changed after Rehoboam, Solomon’s son, took over. After he had established the kingdom and strengthened himself, he forsook the law of the Lord, and so did all of Israel. Thus, in the 5th year, the Shishak king of Egypt came against King Rehoboam. The prophet Shemaiah told Rehoboam the message from the Lord, “You have forsaken me, so I have abandoned you into the hands of Shishak.”

God allows in His wisdom, what He can prevent by His strength so that His children learn and change their ways and draw near to Him.

The Lord’s mercy is soaked in God’s loving kindness; it is so very evident. But I became aware of my short-sightedness and wickedness. God’s love and mercy made me aware of the way I slipped off the pathway God had meant for me. I was blind, but now I am beginning to see. These passages speak to the importance of having a strong relationship with the Lord God. Not a superficial relationship. It is not an outward movement in relationship to satisfy ourselves of spending time in prayer, meeting the requirements of having read the Bible, or having a habit of Bible reading.

Often I find myself in the temple with only an outward sign of praying without my mind and my thoughts not being fully in. I was far, far away from the Lord in my thoughts and my mind. Having obedience in physical aspects, in the physical realm, is easier than having obedience in the spirit. But often, it is only through physical obedience that we reach the place of spiritual surrender in His presence.

King Rehoboam once again went to do evil. He had not set out, decided to uncompromisingly seek God with all of his heart as his greatest desire. We should be careful not to fall into a situation like this. We can only do this by desiring to seek God with great hunger and persevering desire. That alone is the key to continuously living a life pleasing to God. And he did evil because he had not prepared his heart to seek the Lord. (2nd Chronicles 12:14 NKJV) Here he denotes King Rehoboam. And he did evil because he did not set his heart to seek (inquire of, yearn for) the Lord with all his desire. (2nd Chronicles 12:14 AMPC) 14 But he was an evil king, for he did not seek the Lord with all his heart. (2nd Chronicles 12:14 NLT)

Do read the words written in bold in blue once again to imbibe and understand with your heart. Ask the Lord for the grace to seek Him with all of one’s heart. After all, God sought each one of us with such great love that he was open and willing to sacrifice his only son, Jesus Christ.

Then King Abija (grandson of King Solomon) cried out to the Lord. The priests of King Abija blew the trumpets. Then the men of Judah gave a shout. And a mighty miracle happened as they shouted to God. God defeated and killed King Jeroboam, the enemy of Judah.

Ambush: to suddenly attack someone after hiding and waiting for them:

Do you see the faithfulness of God as we cry out to him? It does not matter what kind of secret agenda the enemy has made to defeat you or destroy you. None of the plans of the enemy will prosper if we choose to cry out to God in all earnestness.

But Jeroboam caused an ambushment to come around them from behind, so his troops were before Judah and the ambush behind. When Judah looked, behold, the battle was before and behind; and they cried to the Lord, and the priests blew the trumpets. Then the men of Judah gave a shout; and as they shouted, God smote Jeroboam and all Israel before Abijah and Judah. And the Israelites fled before Judah, and God delivered them into their hands. And Abijah and his people slew them with a great slaughter, so there fell of Israel 500,000 chosen men. Thus the Israelites were brought low at that time, and the people of Judah prevailed because they relied upon the Lord, the God of their fathers. ( 2nd 2 Chronicles 13:13-18 AMPC)

Irrespective of every logic and reason, when we cry out to God in all sincerity, God will come through for your protection and provision. It is better to read slowly and get these matters into our hearts to learn, understand and change our behaviour.

After King Abija came King Asa, a great-grandson of King Solomon. He took away every foreign altar and high place and broke down the idol pillars, or obelisks, and cut down symbols of the goddess Asherah.

King Abija commanded the people of Judah to seek God earnestly and desire him as a vital necessity and to obey the law and commandments. God gave him many years of peace. The kingdom prospered.

Once, the Ethiopians came with a great army that was too large to count. King Asa cried to God. And God protected King Asa in spite of the fact that the number of Ethiopian troops far out surpassed the army of King Asa. Read this from the verses given below.

9 There came out against Judah Zerah the Ethiopian with a host of a million [that is, too many to be numbered] and 300 chariots, and came as far as Mareshah. 10 Then Asa went out against him, and they set up their lines of battle in the Valley of Zephathah at Mareshah. 11 Asa cried to the Lord his God, O Lord, there is none besides You to help, and it makes no difference to You whether the one You help is mighty or powerless. Help us, O Lord our God! For we rely on You, and we go against this multitude in Your name. O Lord, You are our God; let no man prevail against You! 12 So the Lord smote the Ethiopians before Asa and Judah, and the Ethiopians fled. 13 Asa and the people with him pursued them to Gerar; and the Ethiopians were overthrown, so that none remained alive; for they were destroyed before the Lord and His host, who carried away very much booty. (2 Chronicles 14:9-13 AMPC)

But many years later, during King Asa’s 36th year of reign, he gave gifts of gold and silver to the king of Syria to break the Syrian king’s agreement with King Baasha of Israel. The Lord was displeased that King Asa’s trust was not in the Lord God of Israel but in the King of Israel. Although King Asa had experienced greater protection from an army, he chose not to remember and trust God. Rather, he chooses to trust the King of Syria.

Let us remember God’s faithfulness. We will keep our trust in God. He is our protector and our redeemer.